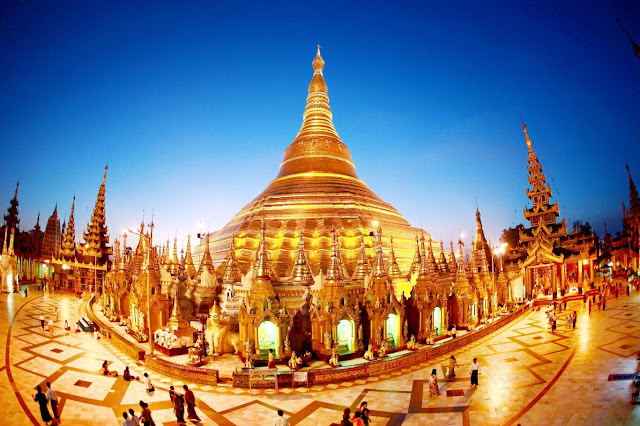 As a symbol of this Buddhist country, Shwedagon Paya, located in the former capital Yangon, in fact is a gold ledge. With located higher than the city to 100 metre, it is not difficult for people to be able to admire this sacred place from anywhere. People here said that this temple was built 2,500 years ago for the purpose of storing a hair of the Buddha left his two younger brothers.

In addition, this is also where the line items as well as many other temples and shrines in the city. Experience Shwedagon At dawn to enjoy all the beauty of this place. Join the pilgrimage before sunset is also a great idea to be able to admire the beauty of the Shwedagon magical sunlight. 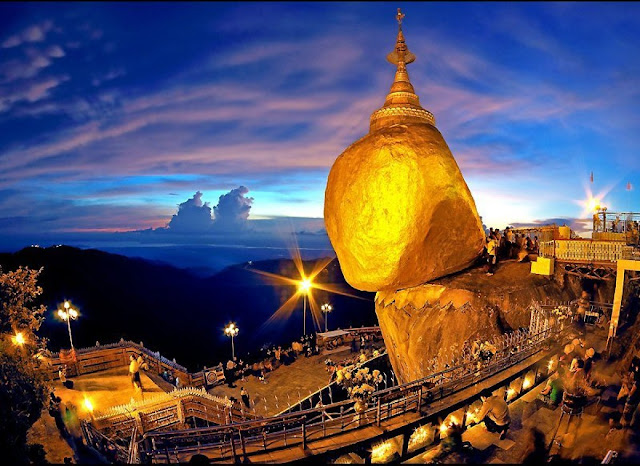 Gold inlaid stone mountains of southeastern Myanmar Kyaiktiyo is one of the famous pilgrimage site. With gold iridescent luster under the sun, it’s not hard to explain why this place could attract so many people. On top of it there are people building a line graph looks small though the line items will not be able to build on it is. Beautiful scenery to overwhelmed by the majestic mountains this is also a point of attraction for many visitors.

The most ideal time period to visit is from November to March next year, when the pilgrims came here to celebrate. If coming during the rainy season (from June to October), the haze will cover most of the land.

There are more than 3,000 temples built across the plains. That is the fruit of temple construction wave extends continuously from the mid-11th century until the late 13th century under the reign of these kings Buddhist cult. Most temples here are the ruins of the gigantic frieze. Temple still has many normal activities as typified Pahto anando beautiful temple. Admire the sunset under the mist of magic this city is an unforgettable experience for anyone who has ever set foot.

Located deep in the remote Rakhine in western Myanmar, are not hard to come across the works of Buddhism is built very carefully and steadily like a real fortress. Mrauk U is also the attractions at the most pilgrims. These reliefs here was erected in stone from the 15th century and 16. But time and weather made for some of the affected structures, almost everything here is still intact.

There was a time this country is the capital of Rakhine region and is one of the richest cities in Asia thanks to trade with Portugal, Spain and the Middle East countries. There is a small note for those who want to visit here is the need to examine the security information carefully because this happened in the violence that is most typical in 2012.

However, both Mrauk U Bagan and locations are stimulating the curiosity of visitors. With rents chariot draw about 15 USD / day, will really ideal for exploring the car owners are very knowledgeable about the project here.

Bago today is no longer the same as the previous Bago. Bago was once the capital of southern Myanmar and is home of the nation’s most beautiful temples, as well as many other important monasteries.

This is also where the sleeping Buddha carved Shwethalyaung famous 10th-century addition, at Kya kha Wain Kyaung, one of the largest Buddhist monastery Myanmar, visitors can admire the spectacle of more than 500 monks seeking alms in the morning. Guests can visit the monastery to contemplate Pythons native pythons. This particular monastery was built over 120 years ago.